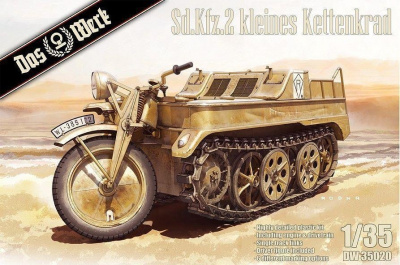 This is an injection-plastic military vehicle model kit. The Kettankraftrad is a semi-tracked car that was produced in Germany between 1941–44 – approximately 8,000 of them were produced during that time. It was initially developed as a vehicle for towing items such as recoilless guns, but it was also used in the Army and the armed SS, and was also used to tow tractors on Air Force bases. Its 1938 Olympia-based engine drives two endless tracks, and the single front wheel is steered with a motorcycle-type handle. The brakes were applied to the wheel, and the layout was for two additional people to ride facing backward. The injection-plastic parts of this kit were made by Dragon, and the engine parts (which will be hidden after assembly) are accurately reproduced. The tracks are assembled and connected, and a driver figure is included, as are decals for six versions. Order yours today! [Includes]: Decals for 6 versions