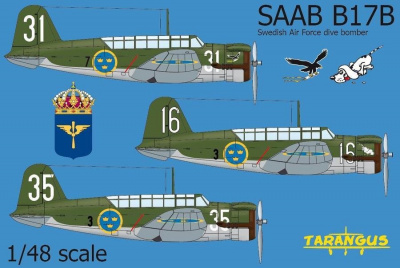 The first SAAB designed and built aircraft was initially an ASJA (SAAB’s prede­cessor) project called the L-10, a reconnaissance aircraft. When ASJA was merged with SAAB, the airplane was named SAAB 17. It was now also intended as a dive bomber. As the European continent was thrown into war, the lack of engines forced three different versions of the SAAB 17 to be developed; the 17A with Pratt & Whitney Twin Wasp, the 17B with Bristol Mercury XXIV and the 17C with Piaggio P. XIbis R.C.40D. The first prototype flew on May 18 1940 and two years later deliveries commenced.