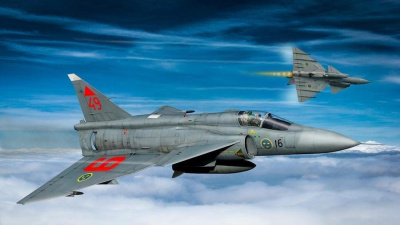 The JA37 Viggen was a Swedish medium-heavy fighter with a secondary role as attack aircraft. It was manufactured by Saab AB. The fighter version of the Viggen was the most common and recently developed of the Viggen variants. The first JA 37 Viggen was flown in 1974 and was rebuilt AJ37 Viggen with RM8A engines. The kit is CAD-produced and injection moulded. Markings for both the gray/gray livery and the intricate splinter camo are included.