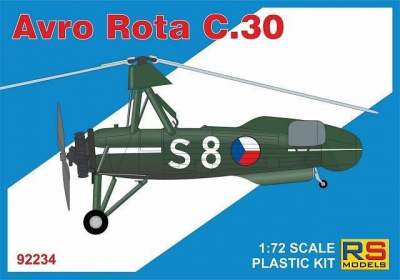 The first production design in the series was the C.30, a radial-engined autogyro with a three-blade, 37 ft (11.3 m) rotor mounted on an aft-leaning tripod, the control column extending into the rear of the two cockpits. The engine was the five-cylinder, 105 hp (78 kW) Armstrong Siddeley Genet Major I used in the C.19 series. The fabric-covered fuselage carried an unbraced tailplane, without elevators but with turned-up tips. The port side of the tailplane had an inverted aerofoil section to counter roll-axis torque produced by the propeller. As with most autogyros, a high vertical tail was precluded by the sagging resting rotor, so the dorsal fin was long and low, extending well aft of the tailplane like a fixed rudder and augmented by a ventral fin. The wide-track undercarriage had a pair of single, wire-braced legs and a small tail wheel was fitted. This model flew in April 1933. It was followed by four improved machines designated C.30P (P here for pre-production) which differed in having a four-legged pyramid rotor mounting and a reinforced undercarriage with three struts per side. The rotor could be folded rearwards for transport. The C.30P used the more powerful (140 hp, 104 kW) seven-cylinder Armstrong Siddeley Genet Major IA radial engine.