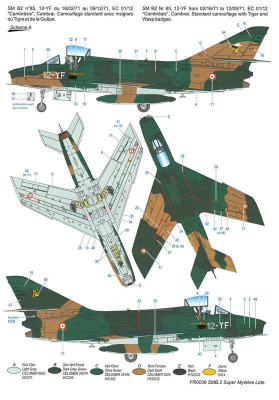 Following the success of its Ouragan, Mystère II and Mystère IVA designs Dassault developed their Mystère IVB into the Super Mystère. The Super Mystère B1 was powered by an Avon engine, and the B2 by an Atar 101. The Super Mystère B2 prototype made its maiden flight on May 15th, 1956 at Villaroche, piloted by Gérard Muselli. It was the first European aircraft outside of the USSR to go supersonic in horizontal flight.

The Super Mystère B2 was ordered on March 29th, 1955, with 178 units being produced between 1957 and 1959. These equipped the 5th, 10th and 12th Escadres de Chasse, and were also used by CEAM, school-bases 701 and 721, and CEV (Test Flight Centre). The 10th EC (Creil) was composed of escadrons 01/10 Valois (unit colour blue) and 02/10 Seine (red). The two escadrilles of 01/10 maintained a tradition by adorning their aircraft with unit insignias from WWI, SPA 84 with its fox head and SPA 93 with its green-necked duck. Four Super Mystères from 01/10 were involved in a SEATO cruise in February 1961 to Bangkok, although one was lost en-route. 02/10 keeps traditions from “Cercle de Chasse de Paris”. The 10th EC operated the Super Mystère from May 1958 until July 1974. The 12th EC at Cambrai consisted of escadrons 01/12 Cambrésis (red) and 02/12 Cornouaille (green). 01/12 used the insignias of SPA 162, a tiger, and SPA 169, a wasp. The unit participated in Tiger Meets and some aircraft were painted in spectacular Tiger schemes. 02/12 Cornouaille wore the Brocéliande dog and scorpion insignias. The Super Mystère was operated by the 12th EC from April 1959 until November 1977. The 5th EC based at Orange-Caritat flew the Super Mystère from February 1961 until September 1966.Escadron­s 01/05 Vendée (red) and 02/05 Île de France (blue), successor to No.340 Sqn RAF, formed the Escadre. Israel ordered 24 Super Mystères and deliveries began in 1958. They fought in the Six Days War and later conflicts. French aircraft were initially left in natural metal with a lighting flash logo on fuselage, tips of wings, and sometimes an arrow on the fin in the escadron’s co­lour. Three airframes returned from Israel, kept their IDF camouflage, and then Dassault painted nine planes in USAF Vietnam-style camouflage, and finally some planes were painted in a standard French grey/green camouflage. Specifications: Single-seat single-engined day-fighter and ground attack plane. Engine: SNECMA ATAR 101 G3 delivering 4,400 kg thrust with after-burning. Wingspan 10.52 m, length 14.13 m, wing area 35 m2. Maximum speed: 1,220 kmh, ceiling 14,800 m, empty weight 6,956 kg.  Internal armament: 2 × 30 mm DEFA 552 cannons. External armament: bombs, rockets, and air-to-air missiles. Documentation (all the below doc in french) :