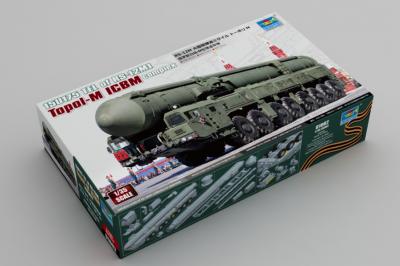 The Topol-M has an improved missile, that is similar to that of the previous Topol. The main difference of the from the previous missile is the way it overcomes enemy air defense and missile defense systems. This missile maneuvers during the flight. Also it carries both active and passive decoys. It is estimated that this missile has a 60–65% chance to penetrate defenses.

A road mobile Topol-M TEL is based on Belarusian MZKT-79221 (previously known as MAZ-7922) 16×16 heavy high mobility chassis. This chassis was specially designed for this intercontinental missile. It is similar in design to the MAZ-7917 which was used as a TEL for the Topol missile, but has eight axles instead of seven. First three and last three axles are steered. So this vehicle is very maneuverable for its size. Also it has good cross-country mobility. The TEL vehicle is operated by a crew of three. The Topol-M mobile launcher has autonomy on roads of 500 km. It allows the vehicle to operate undetected in an area equivalent to a small European country.

Road mobile intercontinental ballistic missiles are harder to detect and hit. It has a high probability of survival the first strike, once the country has been attacked. Once on high alert, the Topol can leave its base and operate in remote forest areas to increase its survivability.