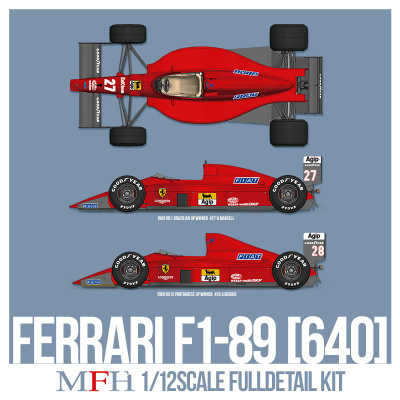 [ About the Ferrari F1–89 (640) ]
In 1987, J. Barnard was tasked with designing a new F1 machine for Ferrari for the following race year. However the new car, 639, was not completed until late into the 1988 season. Along with the weight of Enzo Ferrari`s death in 1988, the 639 was never used in an actual race and instead the F187(/88C) was used for both the 1987 and 1988 season. The 639 would be further upgraded to the F1–89(640) – the first Formula 1 machine to run on a semi automatic transmission. Equipped with a V12 engine, front suspensions running on torsion bar springs, and sporting a sharp nose and cork bottle body line, it made it debut on the circuit during the 1989 season.
The car managed to take championship in its debut race under the hands of N. Mansell, who joined the team in the same year. However due to ongoing troubles with the semi automatic transmission system the car retired from many races. Despite such issues, the F1–89 was able to give fierce competition to its rivals William-Renault and the McLaren Honda duo, A.Prost and A.Senna. In the end it was able to take three championships during the 1989 season.

– based on the version used in the debut race in the 1989 season, where N.Mansell took his first victory after just joining the Ferrari team.
– lower engine cowl used unique to the early build of the car.
– features a different front wing flap compared to Ver.B/C.

– based on the version used at the Hungarian GP where N.Mansell managed his second win of the season.
– high induction type engine cowl used unique to the late build of the car.
– features different front damper and radiator parts compared to Ver.A., and a unique six flap rear wing compared to Ver.A/C.

– based on the version used at the Portuguese GP where G.Berger took his first victory of the season.
– features different rear wing compared to Ver.A/B.

Delivery is about 30 days.

Please write to your note which version you order. Thank you.