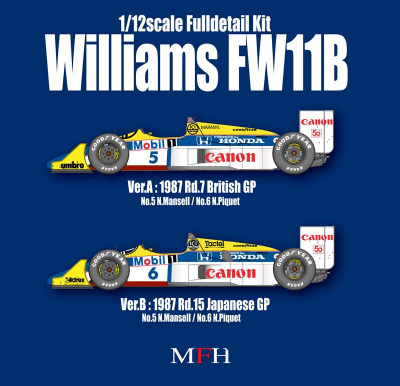 K472●Ver.A : 1987 Rd.7 British GP #5 N.Mansell / #6 N.Piquet
This version is based on the British GP specification, which N. Mansell won in his home country, and the cars installed with Honda engines dominated the first four position.
The turbo duct was installed inside the side pontoon, and the flaps and angle of the rear wing was adapted for the high speed circuit.
Different sponsor marks of the two drivers are included in the decal sheet.

K473●Ver.B : 1987 Rd.15 Japanese GP #5 N.Mansell / #6 N.Piquet
This version is based on the Japanese GP specification, which the rear wing contains 5 flaps, snorkel type turbo duct, and the colour of the “ICI” sponsor mark.

Delivery is about 30 days

Please write to your note which version you order. Thank you.