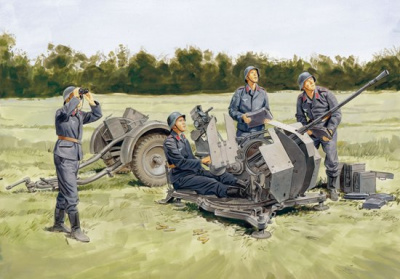 Germany fielded a number of antiaircraft weapons during WWII, and one of the smallest was the FlaK 30 and its modernized version the FlaK 38. These cannons were of 20mm caliber and were the most widely produced German artillery pieces of the war with thousands manufactured. The FlaK 38 was mounted on a single-axle Sonderanhangar 51 (Sd.Ah.51) towed carriage. As well as targeting low-flying aircraft, the weapon could also be used effectively in the ground role.

Dragon is now offering a very useful 2-in-1 kit of the FlaK 38, offering modelers to build either an early-production or late-production version of it. There are slight differences in the two versions, and Dragon supplies all necessary components to build either one. Modelers can pose the gun at various elevations or degrees of traverse, or it can be assembled in transport configuration. Making the FlaK 38 even more desirable is a complete gun crew and its associated Sd.Ah.51 trailer. A dramatic diorama can thus be built straight from the box, and its 2-in-1 characteristics give more versatility. This may be a small kit, but it offers a huge amount of enjoyment!