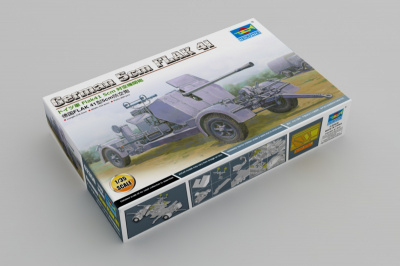 The 5 cm FlaK 41 was 50 mm anti-aircraft gun produced for defending intemediate zone above the light, 37 mm guns' range, but below the ceiling of the heavy, 75 mm and above, pieces. Development of the gun, although started in 1936 was slow, and the contract was awarded to Rheinmetall-Borsig only in 1940. The gun was produced in two models, used for defending important industrial installations. None of the two was a success and both shared the same faults. The speed of traverse was too slow for fast-moving targets and the gun proved underpowered, even though the propellant gave a powerful blast, able to dazzle the aimer even in broad daylight. Altogether 60 of 5 cm Flak 41 were produced, starting from 1941. Some of them were still in use in 1945.